Throughout the years 2005-2016, Ukrainian Helicopters provided critical services in ten separate operations of the UN World Food Programme and six UN peacekeeping missions of the Department of peacekeeping operations.

During this period, we transported 543,000 passengers and 28,500 tons of humanitarian cargo. The total flight time amounted to more than 90,400 hours.

From September 2007 Ukrainian Helicopters supported the UN peacekeeping mission in the Republic of Haiti (MINUSTAH), helping to stabilize the situation in this country. When in 2010 a devastating earthquake hit Haiti, our aircrews, in collaboration with the UN Special Envoy, the 42nd US President Bill Clinton, carried out their mission of alleviating disaster consequences. Throughout just four years of operation in Haiti, our two helicopters transported 50,673 passengers and delivered more than 1,200 tons of cargo. 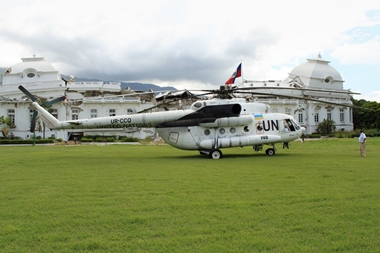 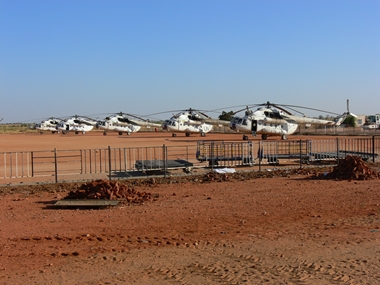 In February 2008, ten of our helicopters flew to the Republic of the Sudan to support the joint peacekeeping mission of the African Union and the United Nations in Darfur province (UNAMID). Afterwards, the company helicopters commenced flying within the scope of the UN peacekeeping mission in the south of this country (UNMIS). Working in extremely dusty regions and adverse weather conditions from 2008 to 2016, our aircrews had transported 388,660 passengers and delivered 5,520 tons of cargo.

In December 2008, the company commenced operations in support of the UN peacekeeping mission in the Republic of Cote d'Ivoire (ONUCI). Initially with a single helicopter, and since 2010 utilizing three helicopters, 23,240 passengers were carried and 330 tons of cargo was delivered. In 2010-2011, three Ukrainian Helicopter crews received a special thanks of the United Nations Organization for an operation that medevacked 72 wounded peacekeepers to the hospital in combat conditions. 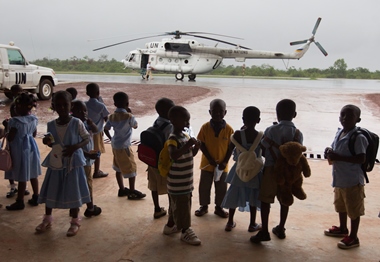 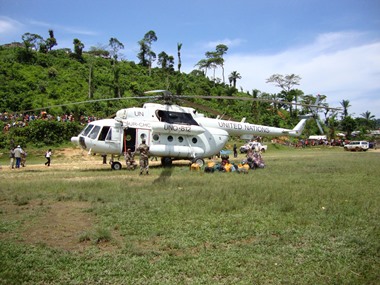 THE DEMOCRATIC REPUBLIC OF THE CONGO (2010-till now)

In 2010, the Ukrainian Helicopters started to work in support of the UN peacekeeping mission in the Democratic Republic of the Congo (MONUC / MONUSCO). Flights were often carried out at high altitudes, and requiring specialized training and experienced pilots. During six years of participation in the mission, our aircrews had transported more than 41,280 people and delivered 2,625 tons of cargo. Throughout all this time, civilian peacekeepers from Ukraine had closely cooperated with the military peacekeepers. In March 2012, one of the UN peacekeepers was seriously wounded and despite marginal weather conditions, one of our helicopters was able to medevac him to a hospital on short notice.

Starting on the day of South Sudan’s independence, four of our helicopters continued robust support for the UN peacekeeping mission (UNMISS). Ukrainian Helicopters transported 65,000 peacekeepers and civilian UN specialists and delivered 4,400 tons of cargo. In April 2012 our aircrews evacuated dozens of local residents, who became victims of bombing. In December 2013, three of our helicopters rescued 16 refugees and 68 UN employees from peacekeeping bases that were under attack. During this critical and risky mission two helicopters were seriously damaged, but thanks to experience and courage of Ukrainian pilots, all of the passengers were safely evacuated. 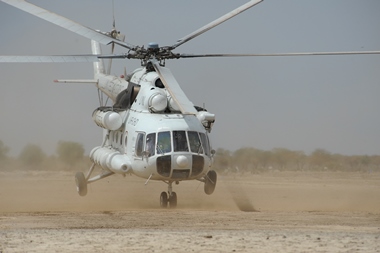 Two of our helicopters have been working for the UN mission in Somalia since May 2015. For the first time our helicopters are using their integrated night vision systems. This greatly increased the level of flight safety allowed aircrews to carry more than 4,100 passengers (292 of whom were wounded, 154 were ill) and to deliver more than 190 tons of cargo. Total flight time so far amounts to more than 1,195 hours. 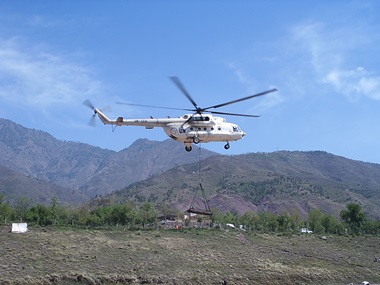 Between 2005-2006, Ukrainian Helicopters helped the victims of a massive earthquake in Pakistan as part of the humanitarian mission of the UN World Food Program. In one of our largest operations we provided nine aircraft, more than any other international rotorcraft operator. Our humanitarian effort in Pakistan proved our ability to both supply a significant number of aircraft on short notice to help address emergency situations, while ensuring a high level of flight safety and quality of service. Our aircrews spent 4,000 hours in the airspace of this country, evacuated 13,700 passengers and delivered 6,100 tons of humanitarian cargo to remote regions.

At the end of 2006, six helicopters from Ukrainian Helicopters flew to East Africa to help the victims of devastating cyclones. During the three months of work in Kenya, Somalia and Ethiopia, the aircrews transported 1,300 tons of humanitarian cargo to the disaster area and evacuated more than 2,500 victims. From February to April 2007, humanitarian operations were concentrated in the Zambezi River valley, which had flooded the plains of Mozambique. Ukrainian pilots also delivered crucial food supplies to mountainous villages of Madagascar that had been hit by the cyclones. In less than a month of work, our helicopters transported 135 tons of humanitarian cargo and about 300 passengers, many of whom required urgent medical care. In October 2007, our pilots also supported the WFP humanitarian mission in Uganda. During just three years of operation in East Africa, company helicopters had transported more than 3,000 tons of humanitarian supplies and evacuated 4,700 disaster victims. 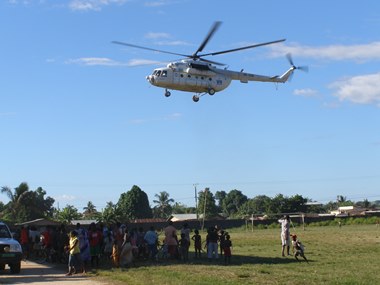 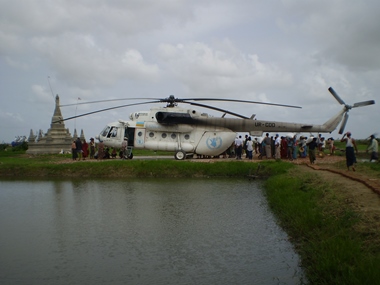 Because of cyclones, more than a million and a half Myanmar residents were left without a roof over their head or any means of subsistence. Three aircraft of Ukrainian Helicopters came to their aid. The air operations had to be conducted despite adverse weather conditions, and with surgical precision landing on tiny, islands surrounded by flooded areas. Throughout a month and a half of operations, Mi-8MTV-1 helicopters evacuated nearly 1,500 victims and delivered about 200 tons of humanitarian cargo to villages that had been cut off by the natural disaster.

In 2013, Ukrainian Helicopters was brought to the Republic of South Sudan to help alleviate the effects of massive drought. Working in the World Food Programme humanitarian mission, our aircrews evacuated more than 10,000 victims suffering from the disaster. In addition, 4,600 tons of humanitarian cargo were delivered to remote villages impacted by the drought. 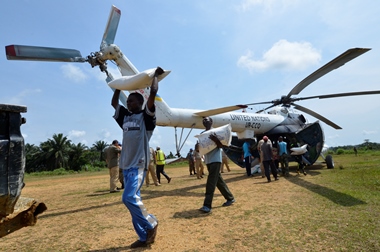 In 2014 Ukrainian Helicopters commenced work in Ethiopia in the support of the UN humanitarian mission and UN High Commissioner for Refugees (UNHCR). In the course of 16 months of operation in this country, our aircrews transported more than 7,300 refugees. Furthermore, our aircraft delivered more than 50 tons of humanitarian cargo to remote villages in 650 hours of logged operations. 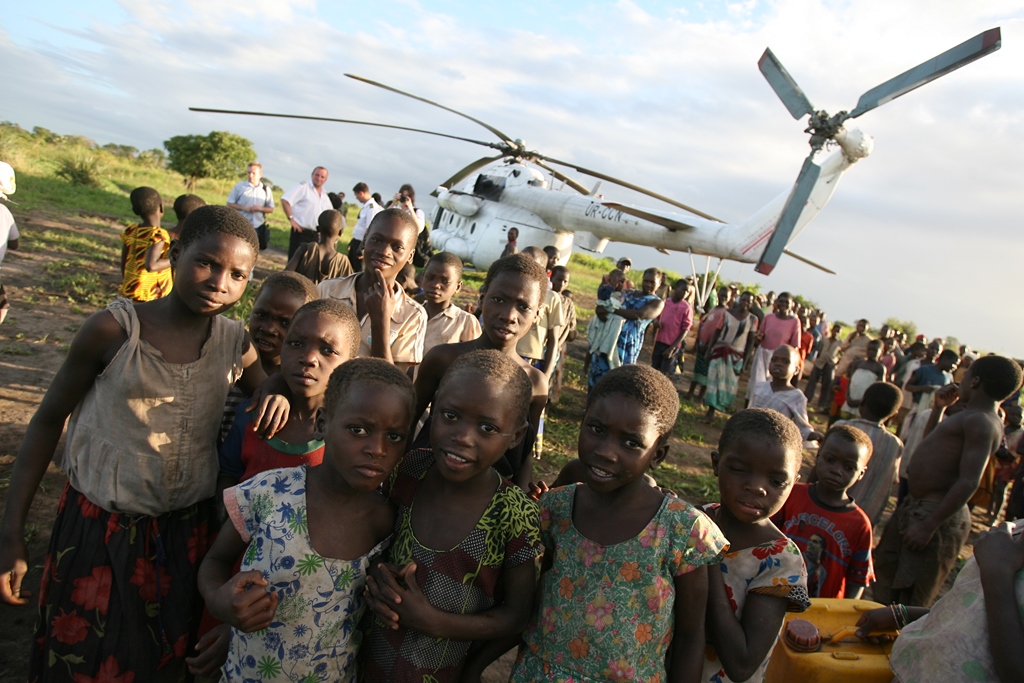 OPERATIONS IN THE AREA OF CONFLICT 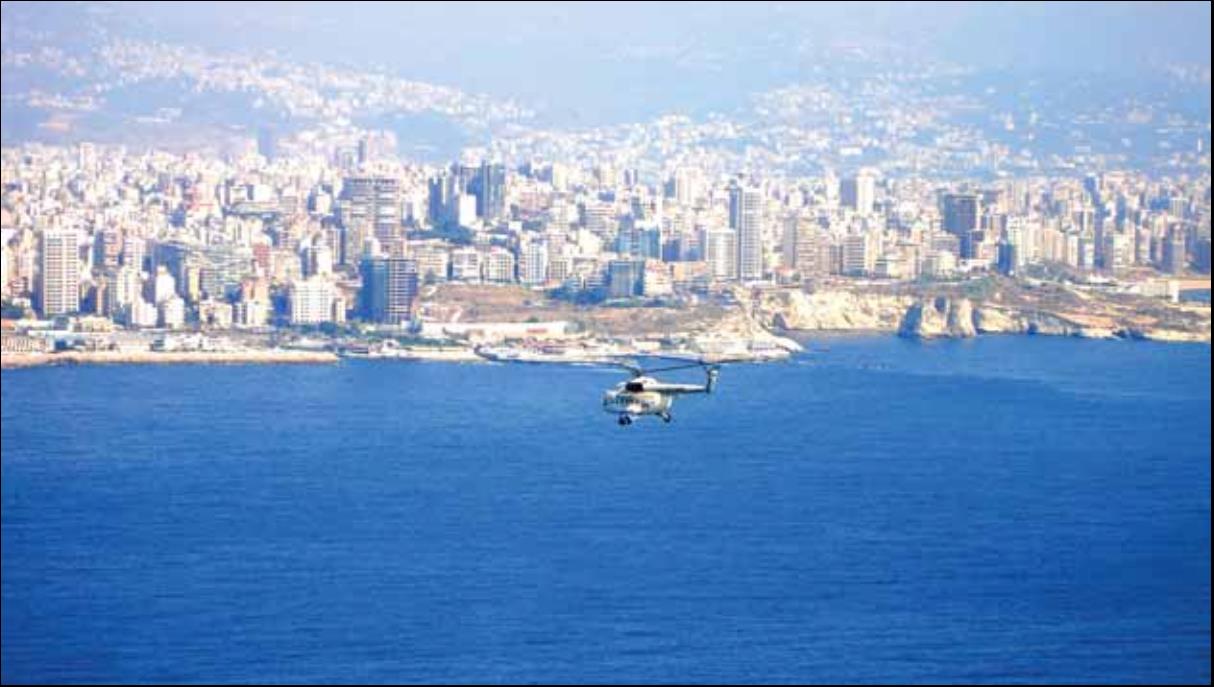 In 2008, the Government of Canada requested two Ukrainian Helicopters for rescue operations and humanitarian assistance in the Middle East. Hundreds of Lebanese civilians, foreign experts and employees of diplomatic missions were evacuated from Beirut, Lebanon which was suffering enormous damage due to armed conflict. For the majority of the rescued people, it was the first opportunity to get acquainted with Ukrainian pilots and their reliable equipment. The Government of Canada greatly appreciated the work of Ukrainian Helicopters in carrying out this rescue mission.

A massive forest fire occurred in Portugal in 2004 where hundreds of hectares of forests were in flames, threatening lives and homes. At the request of the Ministry of Internal Affairs, four helicopters from our company engaged in firefighting, spending 510 hours in the air. Ukrainian aircrews demonstrated the capability to work effectively with the Bambi Bucket while coordinating their actions with local firefighting services. The company was highly praised for their services by the National firefighting service and the Ministry of Internal Affairs of Portugal. 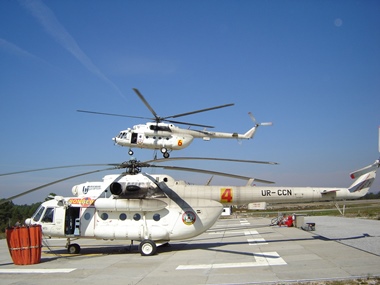 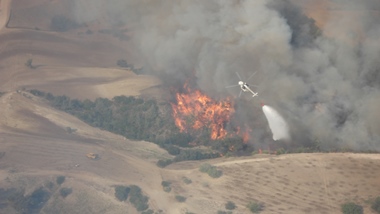 Similar firefighting operations were carried out by Ukrainian Helicopters at the request of the Ministry of Forestry in Turkey. In 2005 and 2006 utilizing four helicopters, and in 2007 utilizing eight aircraft, hundreds of hectares of forests were saved. Aircrews performed 2116 firefighting water drops and logged 727 flight hours. The Turkish government expressed enormous appreciation for Ukrainian Helicopters contribution towards solving the forest fire crisis.

In August 2007, forest fires spread through southern Ukraine. We provided recently overhauled and modernized helicopters for the Ministry of Emergency Situations on a non-profit basis. The fires were massive, but the pilots had already had experience in addressing this kind of disaster while using Bambi Bucket. As a result, more than 500 tons of water were dropped on the pockets of fire. In summer 2010, the company sent one helicopter to patrol and extinguish fires in two regions. In one of them, isolated pockets of fire were quickly eliminated preventing far worse damage. 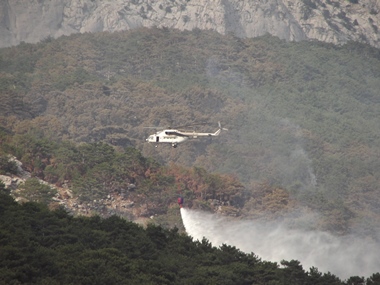 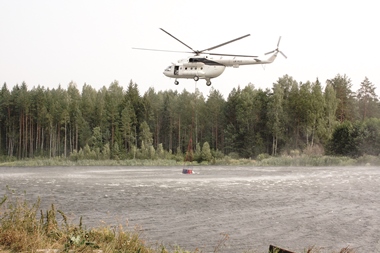 At the request of the Government of the Russian Federation, one company helicopter with two aircrews helped extinguish forest fires on a non-profit basis in the Kaluga region in August 2010. During its 55 flight hours, the helicopter dropped 1320 tons of water on pockets of fire. As a result, hundreds of hectares of forests were saved.